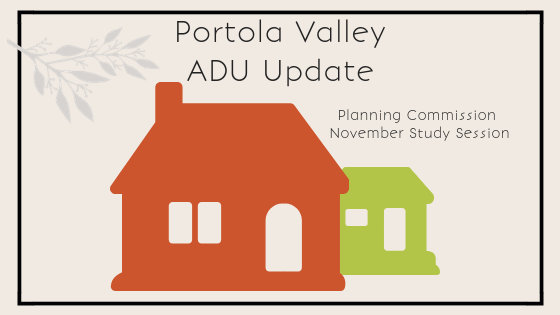 Last night was another late night at the Portola Valley Planning Commission meeting. The Staff presented a “full outline of a potential approach to the code” governing ADUs. The outline “uses informal language for simplicity and clarity.”  The proposed outline for the code was generally well received by the Commissioners. The outline, accompanying Staff Report, and minutes from earlier Planning Commission meetings where the Commissioners offered directional guidance to the Staff can be found here.  On October 22nd the ASCC discussed ADUs and the comments of the ASCC were incorporated into the Staff outline for proposed reorganization of the code.  The Staff Report explaining the proposed outline details Commissioners sometimes contradictory comments on each issue, provides additional information as requested, and explains the Staff proposal for each issue.  At the meeting, the Commissioners only had time to discuss the first few sections of the report addressing: how regulations impact each other; Staff Discretionary Review; and the concept of ADUs as accessory.

As mentioned in my last blog, one of the largest reforms being discussed is the creation of a Staff Discretionary Review process for some set of ADUs.  The goal of the new process is to reduce costs and speed up the approval process. Currently, ADUs fall into 2 review categories:  ministerial staff review or ASCC discretionary review.  While there is not complete alignment among the Commissioners, it seems that discretionary staff review will most likely be adopted and that one member of the ASCC will participate in each review process to represent the community. The Commissioners asked Staff to modify the Draft Staff Discretionary Review Policy to require that in addition to the neighbor notice procedures proposed, the neighbors be notified when an Approval Document is issued and be advised of the procedure and timeframe for appealing a decision to the ASCC.  Also, the Commissioners suggested that any member of the ASCC be able to request that applications of concern be reviewed by the entire ASCC.  The ASCC would automatically have Discretionary Review over ADU applications where:  a second driveway is requested; the ADU is proposed in a non-residential zone; the property has historic resources; or where the proposed floor area is above certain limits (limits TBD).

It appears that ADUs are going to be allowed on all parcel sizes within Portola Valley (this issue will be addressed in detail at the next meeting).  However, due to an administrative issue the Commissioners were not able to discuss what the floor area limitations requiring review by the ASCC based on parcel size should be.  The Town lawyer was present at the meeting and stated conflict of interest laws might preclude Commissioners from voting on floor area triggers for parcels of the same size of parcels that they own.  The issue was originally raised with respect to Commissioners that own smaller parcels but was broadened to all Commissioners.  Until the conflict of interest matter is resolved and the decision-making process is finalized, discussion of floor area review triggers by parcel size is tabled.  However, the proposed limits in the Staff outline were 1200 sqft for all parcels less than 3.5 acres.  For parcels greater than 3.5 acres the trigger would be 1500sqft for 1 unit or 1200sqft each for 2 units.

The Commissioners discussed, and the majority agreed with the ASCC, that ADUs must be accessory in nature.  An important element of that concept is that the ADU be smaller than the main house.  To this end, the Staff has proposed the idea of both a hard maximum size limit coupled with a proportional maximum. The Staff proposed that an ADU can be no larger than the lesser of 2000sqft or 60-70% of the floor area of the existing or proposed main residence.  The Commissioners generally agreed with this approach and seemed to favor a proportional limit of 70%.  Applying this rubric, the maximum allowable external ADU for a property with a 2200 sqft main house would be 1540sqft. Both Staff and Commissioners noted that the overarching limitation will be the individual AMFA per parcel.  Especially for small or sloped parcels with smaller AMFAs, the AMFA will often function as the cap on ADU size.

Staff asked for direction on whether the Commissioners would like Staff to divert limited Staff resources to conduct a community survey on ADUs.  The Commissioners spent a significant amount of time discussing what is the overarching purpose of the exercise to review the ADU policy and whether a survey at this stage of the process would help define/refine the purpose and goals.  It was agreed that the major Town goal is to encourage residents to build ADUs that will be rented out as affordable housing units.  Also noted was demand from residents for these units to allow for aging in place and inter-generational living.   However, the Commissioners seemed concerned that some in the community might use the streamlined process for ADUs to build additional square footage that ultimately will not be used to solve these housing issues.  Commissioners acknowledged that they ultimately cannot regulate end use. After much discussion, the Commissioners agreed that information from the residents about who would like to build an ADU, why, and their concerns would be helpful, but to divert Staff resources at this late stage to perform such an exercise would just slow down the process.

At the next Planning Commission public hearing on this matter the following sections in the proposed code outline prepared by the Staff will be discussed in detail:  ADUs in all zones; ADUs on all lot sizes; floor area – total allowed; treatment of basements; height restrictions; parking; driveways; utility undergrounding; second addresses; owner occupancy; short term rentals; findings; and community notice.

Come join me and be part of the conversation on December 5th at 7pm.